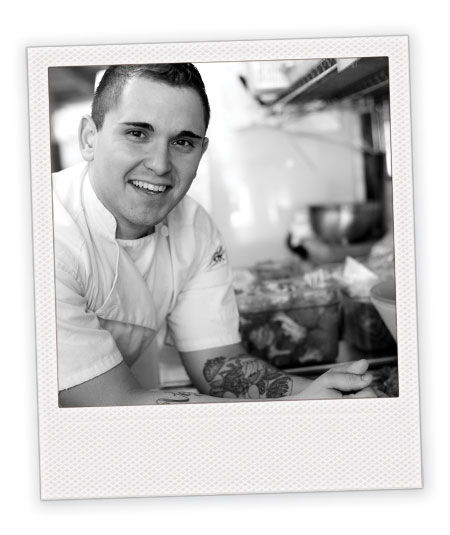 Cooking since the age of 15, Doug fell in love with the kitchen instantaneously. He felt a deep and sincere love for all things food related. Camaraderie, hard work, attention to detail and the constant creativity were all factors in drawing him to continue his goals and move on to Chef School.

After attending George Brown Culinary Chef Program, Doug took an apprenticeship and continued to hone his skills learning the inner workings of a busy professional kitchen.

After working for Toronto's best chefs in some of the most challenging atmospheres he found that he needed to make a change. Not realizing then how much food is a factor in all aspects of life, he found himself overweight and unhappy. It was at this point that he watched an undercover video from PETA (people for the ethical treatment of animals) that his life would change forever.

Over the course of the next 6 months (while working on a grill in a steakhouse), Doug began to transform his diet and his life forever. Slowly weight began to peel off and he began to feel a lightness he never experienced before. By taking what he already knew from his years of culinary training he began to relearn how to prepare food in a healthier light. Pairing this with a deep concern for the planet and the welfare of all it's inhabitants the next most logical step was to become vegan.

Since then Doug has taken healthy, organic, plant based cuisine to a whole new level. Challenging mainstream thought on diet and ethics, he continues to create inspired dishes using the highest quality ingredients possible. He has been featured in publications both online and print, is a contributor to various magazines, makes appearances on national television, is a plant based consultant and is an internationally published author. His first cook book Eat Raw, Eat Well, 400 Raw, Vegan and Gluten Free Recipes was published in March 2012.