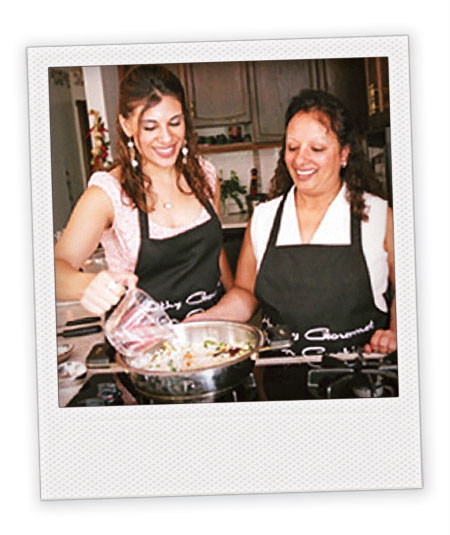 With lifetime cooking experience specializing in Indian cuisine from all over India, Arvinda Chauhan has been professionally teaching since 1993. Arvinda started to cultivate her culinary skills at the age of 7, allowing for Indian cuisine to be very intuitive for her, making it naturally inherent in her. Although cooking her whole life, it wasn’t until 1993 when she put her passions into reality by starting her own cooking school called Healthy Gourmet Indian Cooking school. Having this long experience allows her to take a very natural and graceful approach to teaching others to cook Indian cuisine.

As a cooking instructor, recipe developer, consultant and artist, Arvinda views Indian cuisine as an art form—where her ingredients and spices make up her palette to make endless culinary creations. Her cookbook, named after the cooking school “Healthy Gourmet Indian Cooking” is indicative of this also.

Preena Chauhan’s affinity towards food was awakened early on. In her family, the kitchen was the household focal point because commensality was central to everyday eating. Having a mom as a cooking instructor, she was encouraged to gain an appreciation of food and naturally took an interest in cultivating her love for it.

Having been involved in Arvinda’s Healthy Gourmet Indian Cooking School in Oakville, Ontario since its conception, Preena has been instructing Indian cooking classes with her mother Arvinda Chauhan since 1993. The premise of their classes is to teach regional and authentic Indian cuisine emphasizing its healthier side. Their goal is to convince Western perception about Indian cuisine that it cannot be reduced to a single term “curry”, as it’s commonly recognized as in North America.